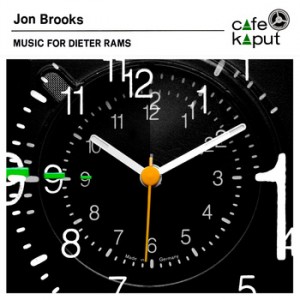 The next time you are awoken by the beeps of your alarm clock and go fumbling for the snooze button, pause for a moment and try to imagine all the possible sounds you might be able to make from the simple beep beep and the tick tock of the clock.

If that sounds like quite a meagre sound palette to work with then be amazed when we tell you that Jon Brooks (of Advisory Circle fame) has managed to fashion a whole album of tunes made with nothing more than the sounds of a Braun AB-30 alarm clock!

The album is a tribute to that design genius, Dieter Rams, whose work was featured in an exhibition at the Design Museum last year.

Jon Brooks’ Music For Dieter Rams was released today on his Cafe Kaput net label and is now available from his Bandcamp page. And if you’d like to hear how the whole thing was done, Mr Brooks has also provided a highly informative audio commentary.

This entry was posted in new release and tagged Dieter Rams, Jon Brooks, The Advisory Circle. Bookmark the permalink.