Jez Butler – The Lighter Side of Concrete #moonbaserecommends

Posted on October 19, 2013 by projectmoonbase 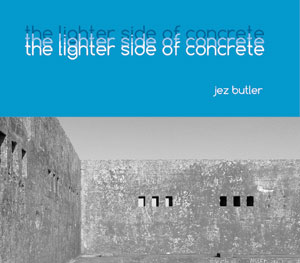 We get so many great albums passing through the air-lock at Project Moonbase that we thought it would be a good idea to highlight one every week and urge our dear listeners to acquire a copy for themselves.

For the first in this new feature on Project Moonbase we bring to your attention an album featured on PMB148: F for Fake, namely a new album from Jez Butler on his own Disques Boum record label called The Lighter Side of Concrete.

This new release from Death By Chocolate member Jez Butler is his own musique conrete homage to that pioneer of the wooden ruler and member of the BBC Radiophonic Workshop, John Baker. Barring the 3 bonus electronic tracks, every track on the album was made by sampling sounds made by household objects.

It has all the qualities we look for at the Moonbase: it’s light-hearted, radiophonic and sounds like the future evoked from the distant past.

It’s one of the best things we’ve heard all year.

This entry was posted in recommendations and tagged concrete, Jez Butler, musique concrete. Bookmark the permalink.