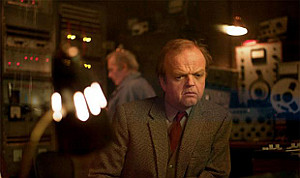 As a result of a tip-off from our London correspondent, Space Disco Jeff, I went to see the “world premiere” of Peter Strickland’s new Warp co-produced film Berberian Sound Studio at the Edinburgh International Festival last night.

In the 1970s, Gilderoy, a British sound technician (Toby Jones) is brought to Italy to work on the sound effects for a gruesome horror film. His nightmarish task slowly takes over his psyche, driving him to confront his own past.

It’s certainly quite an odd watch. By turns creepy but also very funny and almost slap-stick in places. Most of the film takes place in a fairly claustrophobic recording studio with us watching Jones’ reactions to the horror film, without ever actually seeing any of the film ourselves.

It’s well worth seeing, even if it felt a little on the long side. It’s main appeal, though, will be to sound engineers, fans of Italian horror films and their abstract electronic scores. There are lots of lovely lingering shots of old signal generators, reel-to-reel tape recorders, patch cables and hand-written cue sheets. There’s even a whole scene centred around an old Copicat tape echo machine…

The main reason I was interested in seeing the film was that Broadcast provided the soundtrack. The soundtrack is mostly pretty ambient and sinister but one of the highlights is where they briefly get to rock out to the title sequence of the film-within-a-film, designed naturally enough by Julian House.

Peter Strickland and most of the cast (including Toby Jones) were in the audience and got up on stage at the end for a Q&A led by the Artistic Director of the Film Festival. Strickland said he would describe the film as being structured more like a piece of music than that of a conventional film. He also talked about his love of old Italian exploitation cinema and the Italian avant garde and said the film was largely a tribute to Luciano Berio and Cathy Beberian and the studio in which they worked. He was particularly intrigued by the fact that Berio, Berberian as well as many other leading lights of the Italian avant garde were earning a crust on the side producing music and sound design for some pretty dodgy Italian giallo movies.

Strickland’s own background is in music and sound design, being one half of The Sonic Catering Band (the other half being Colin Fletcher) since 1996.

It was also lovely to see Broadcast’s James Cargill in the audience. The film has a dedication to the much-missed Trish Keenan at the end of the closing credits.

BREAKING: There were originally only going to be two showings of Berberian Sound Studio at this year’s festival but I’ve just noticed that the Film Festival has added a third showing on Sunday 1 July at 6:45pm.

This entry was posted in review and tagged giallo. Bookmark the permalink.