Posted on August 19, 2014 by projectmoonbase 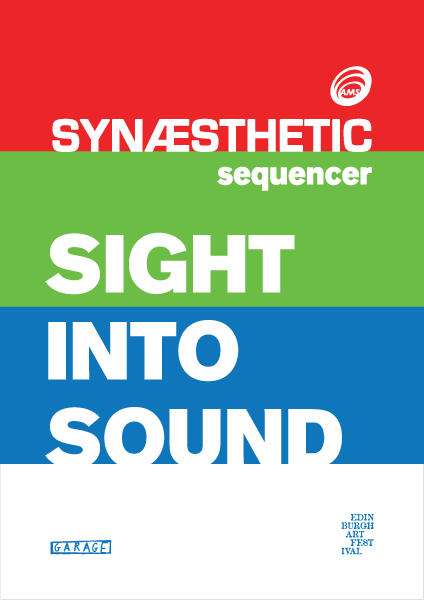 Mysterious experimental music outfit, Aleatory Music Systems, who are believed to have one of the Moonbase crew amongst their number, will be bringing the Synaesthetic Sequencer to Edinburgh this week for two performances.

Synaesthetic Sequencer is an audio-visual installation which takes its title from the notion of synaesthesia, the sensation some people have whereby one form of sensory stimulation provokes a response in one of the other five senses.

In the case of the Synaesthetic Sequencer, colours perceived via a video camera are converted into spontaneously composed music in real time.

The system breaks down a scene into an 8×8 grid of colours. It then works its way through each cell of the grid, analysing each one to determine how much red, green and blue makes up the colour of the cell. This information is then used to play a sequence of 3-note chords, with each note corresponding respectively to the amount of red, green or blue in each cell. This process runs in real time.

It’s a highly interactive system – you can influence the music being played either by moving yourself or other objects in front of the camera or by using a set of controls (in this case game controllers and dance-mats).

On Thursday 21 August you can catch a staging of the Sequencer at a special edition of the monthly evening session the Drawing Room which will be taking place at the Royal Scottish Academy from 5:30pm to 7pm.

Then on Saturday 23 August, as part of the Edinburgh Art Festival, the Sequencer will be able for you to fool around with from 12pm to 4pm at GARAGE, 51a Northumberland Street.

Both sessions are entirely FREE!

Please bring or wear something red, green or blue.